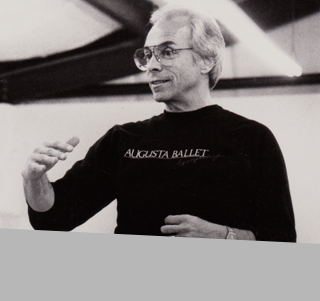 At the age of thirteen, Ron Colton entered his first dance class in Detroit – that led him to a lifelong career in dance. Ron moved to New York City, dancing in musicals on Broadway, before joining the Slavenska-Franklin Company touring Japan and the United States. He joined the New York City Ballet in 1953 and toured Europe with the Company. In 1958, Ron taught his first dance class in Chicago and knew immediately that he had found his calling. Drawing from his own impeccable dance training, Ron’s move to Augusta in 1964 clearly changed the face of the arts in Augusta. Whether being in his class or watching his dancers perform, you knew you were in the presence of a master. As a Dance Magazine critic noted, “Whenever the director of a resident company complains that his community is too small to yield good material for him to train, I cannot help but think of Ron Colton…He doesn’t ‘find’ material. He makes it.”

Ron was on the advisory panel for the Governor’s School for the Arts in South Carolina and served as a panelist for the South Carolina Arts Commission. He was a consultant for the National Endowment for the Arts and, at the request of the Governor of Georgia, was for twelve years on the Dance Panel of the Georgia Council for the Arts. In 1981, he received the Governor’s Award for Achievement in the Arts. Ron was a member of the Greater Augusta Arts Council and the Board of Directors of Regional Dance America/Southeastern Regional Ballet Association. On four occasions, Ron was host director to the Regional Dance America/Southeastern Regional Ballet Association Festival in Augusta. He has twice served as Chairman of the National Choreographer’s Conference.

With talent, insight, faith and good humor, Ron Colton has had an immense impact on dance in the Southeast as a teacher and director. He created and grew the Augusta Ballet for thirty years taking it from a fledgling civic troupe to a professional company. His legacy of dance in Augusta continues to flourish in Colton Ballet Company.